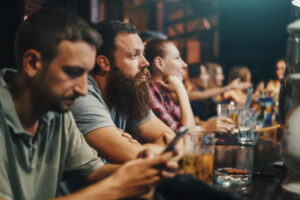 For the swanky bars and restaurants that surround Manchester Central convention complex, Conservative party conference normally means being fully staffed to meet extra demand, but this year is different. Huge shortages of pivotal workers in hospitality mean many venues are unable to fill their rota.

In the 30 years since Dimitri’s first opened on Manchester’s Deansgate, the restaurant has employed hundreds of European staff, but not now. “We’re a Mediterranean restaurant so we used to have a nice mix of people from Greece, Spain, Portugal or Italy, but all of a sudden that’s gone,” said Susie Benson, duty manager.

In the period of June to August this year, job vacancies in the UK reached the highest levels since records began, tipping over the one million mark for the first time, according to the Office for National Statistics. The hospitality sector has the largest proportion of vacancies, with nearly six empty posts for every 100 filled ones, a 75% rise on the previous quarter.

Some hospitality roles are more badly affected than others. Ezra & Gil, an upmarket independent coffee shop on Peter Street directly opposite the Midland Hotel, where many conference events are taking place, would expect to do a roaring trade over the next couple of days with meetings, lunches and casual coffees.

But, being a new venue that started trading after lockdown, it has managed to recruit only four of the 13 chefs it needs and, as a result, is operating with a reduced menu and shorter opening hours, which owner Alison Creely described as “disappointing”. She said: “There are huge chef shortages at the moment. During lockdown, a lot of people have re-evaluated and realised they don’t want to do it any more.”

Lindsay Valentine, manager of Ezra & Gil, said experienced staff were the most difficult to hire. “A place like this, we’re looking for people with good experience and we’re not just not finding enough of them,” she said.

“We want to be somewhere people can come for a late-night coffee but we’re just not able to do that at the moment with the staff we have.”

It is the same picture at Three Little Words, a gin bar run by Spirit of Manchester distillery, directly underneath the convention centre. The bar is expecting to be very busy this weekend and is booked out for two large party conference events. Deputy general manager Charlotte O’Neill said she has only just managed to find enough staff to cover the weekend.

“We’ve now just about got the staff we need.” she said. “There’s a lack of kitchen staff, and I’m hearing it’s the same for door staff too. Some places are paying GBP14 an hour, GBP5 an hour above minimum wage.

“There’s a Facebook group for bar workers, and if someone posts in there that they’re looking for a job, they’re just deluged with replies from managers who need staff, especially for the more experienced people.

“One problem is that nobody wants to work late nights. They’ve had a change in lifestyle in lockdown and they don’t want to go back to that,” she added.

But, time and again, in remain-voting Manchester, one cause is mentioned above all others: “Brexit.” “That’s undoubtedly a big factor,” O’Neill said. Even mid-level chefs and front-of-house staff do not earn enough to meet the requirements for “skilled” worker status under government rules that came into force after Brexit.

“We had a lot of European chefs,” said Creely, who also runs the flagship Ezra & Gil on nearby Hilton Street, “but a lot of people left after Brexit. Brexit is massively responsible for the problem, particularly when it comes to chef shortages.”

The more high-end the venue, the more good experience is essential, and the more difficult it seems to be to find the right workers. Creely said: “Other owners are in the same boat. That’s the only thing that makes it bearable really.”

In all the discussions, debates and presentations at the Tory party conference, Manchester hospitality businesses are hoping one message gets through. “They need to relax the Brexit rules,” said Creely.

At Dimitri’s, which has a red “Vote Love” sign in the window – a play on the “Vote Leave” posters that appeared everywhere during the 2016 referendum – Benson agreed. “We need to let the Europeans back in to work. It never should have stopped.”

Read more:
A million unfilled jobs – and no one to serve the Tories in Manchester

Join the exclusive subscription today and get premium articles for free

Politicsinsuranceusa.com it's managers and its employees (collectively "The Company") do not make any guarantee or warranty about what is advertised or above. Information provided by this website is for research purposes only and should not be considered as personalized financial or health advice. Copyright © 2021 Politics Insurance USA. All Rights Reserved

Join the exclusive subscription today and get premium articles for free